During its February meeting (in 2017), the Session engaged in a thoughtful discussion about how we at UPC can reach out with hospitality to the refugees in our community. The Session approved the resolution found below. In March (2017), the Adult Education Committee partnered with the Outreach Committee to offer three sessions discussing the We Choose Welcome Initiative. Through these discussions, the congregation continues to discern how the Spirit leads us to support refugees in our community. We invite you to join us in this effort!

Whereas we are now witnessing the highest levels of displacement on record.

(An unprecedented 65.3 million people around the world have been forced from their homes. Among them are nearly 21.3 million refugees, over half of whom are under the age of 18. [ii]); and

Whereas some voices are calling us to abandon the very foundations of our biblical faith to welcome the stranger and to give safe haven to the refugee, and to set aside the values of compassion and hospitality that have marked our historic identity as a nation;

Be it resolved, the Session of University Presbyterian Church, meeting on this 16th day of February 2017, decries any policy that discriminates against refugees by nationality, race, ethnicity or religion,

And further, endorses the January 28, 2017 statement by the Rev. Dr. J. Herbert Nelson II, Stated Clerk of the General Assembly of the Presbyterian Church (U.S.A.), which states “We stand ready to welcome our new neighbors, friends, and family of all faiths and nations,”[iii]

And further, accepts the December 1, 2015, challenge issued by the Rev. Gradye Parsons, former Stated Clerk of the General Assembly of the Presbyterian Church (U.S.A.), asking congregations to take a photograph with a “We Choose Welcome” banner and send the photo to their public officials,[iv]

And further, encourages the congregation to implore those elected officials to embrace the values of compassion and hospitality essential to our identity as a nation.

Ways to Be Involved

Next Steps in UPC’s Refugees Support Efforts (We Choose Welcome)

Our congregation continues to discern the call to support refugees in our community.  A task force has organized the following ways to be a part of UPC’s continuing We Choose Welcome initiative:

All are invited to join the effort.  Contact Reid Chisholm at (919) 260-0992 or d.reid.chisholm@gmail.com with any questions or interest in sharing your talent and time. 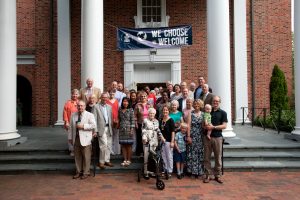 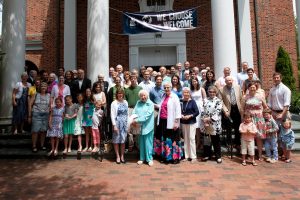 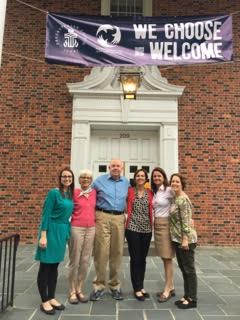