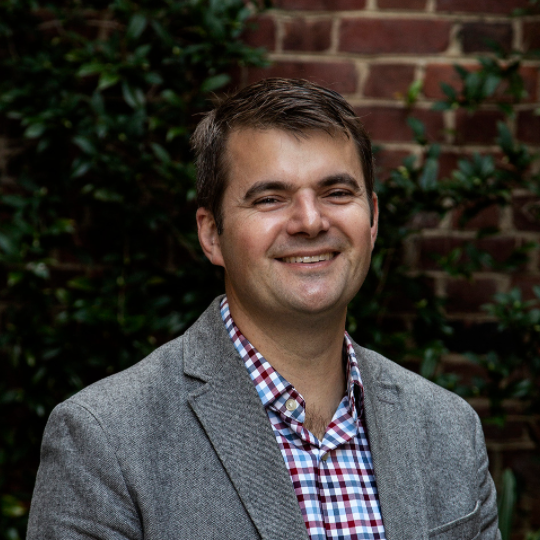 Jarrett joined the UPC staff in August 2019. He grew up in Raleigh, North Carolina and became a “traitor” to his NC State traditioned family when he went to UNC-Chapel Hill for college.  Missing youth group terribly, Jarrett quickly discovered Presbyterian Campus Ministry where, in addition to exploring his call to ministry, he also met Meg.
After college, Jarrett served as a youth minister for one year and then spent another year traveling, spending a great deal of time in Port-au-Prince, Haiti living in community with disabled children at Wings of Hope. He then went to Union-PSCE Seminary (now “Union Presbyterian Seminary”) and then went on to serve as an associate pastor for mission and young adult ministry at Village Presbyterian Church in Kansas City, MO. Prior to coming to UPC, Jarrett and Meg served as co-pastor Heads-of-Staff at Burke Presbyterian Church in VA.
When not engaged at Church, Jarrett enjoys running and hiking.  He is also an obsessive music fan intent on keeping up with independent music of all kinds – reading blogs and record reviews, scoping out live shows and constantly spinning tunes in the car, home or office. 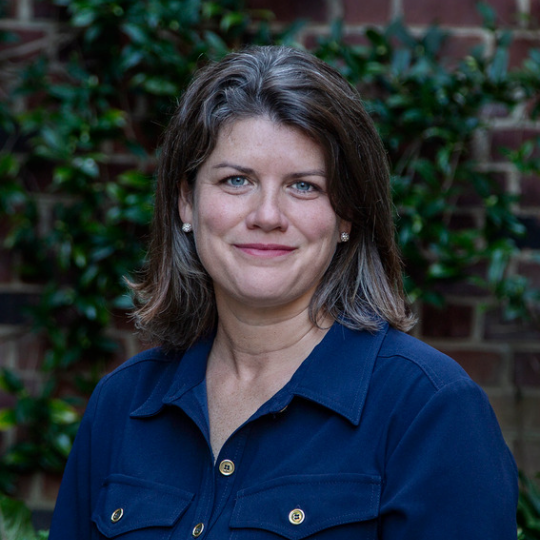 Meg joined the UPC staff in August 2019. She is a native of North Carolina, graduated with a Bachelor’s in English Literature from the University of North Carolina at Chapel Hill and with a Master’s in Divinity and in Christian Education from Union Presbyterian Seminary in Richmond, VA.
Meg was ordained as a Minister of Word and Sacrament in 2006, at Village Presbyterian Church near Kansas City, MO, where she served for seven years in the role of Pastoral Care. She and Jarrett served as co-pastor Heads-of-Staff at Burke Presbyterian Church for 6 years before coming to UPC.
Meg and Jarrett have three young daughters: big sister Naomi and, twins, Caroline and Zanna. She has hitched her life to the promise that Jesus Christ is the light that overcomes darkness, is the love that is stronger than all fear, and is the sure and certain assurance that new life is possible, even when it seems otherwise. 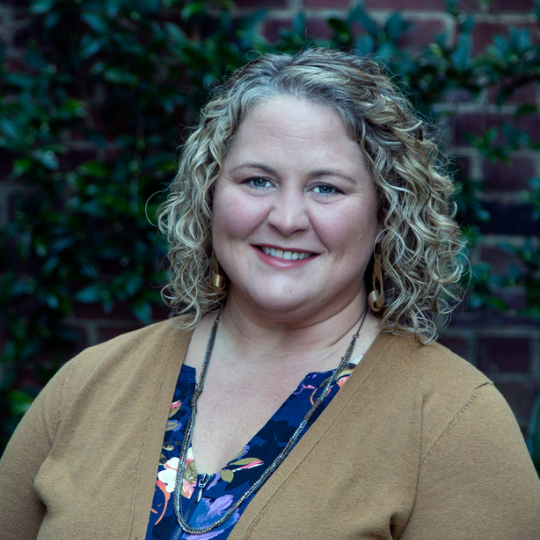 Kim began as the Staff Associate for Youth Ministries in November of 2007.  She grew up in Red Springs, NC, and graduated from UNC-Chapel Hill in 2003 with a degree in Recreation and Leisure Studies and Psychology. As a product of University Presbyterian Church’s Campus Ministry program, she spent the fall of 2003 as an intern in the Center for Youth and Young Adult Ministry at Montreat Conference Center.  In January of 2004, she returned to Chapel Hill as the Camp Director at New Hope Camp and Conference Center.

Kim bleeds Carolina Blue and knows the words to all of the UNC fight songs. She loves leading games that make you laugh, organized chaos, and trips in the van. Kim lives in Durham with her dog Murphy. 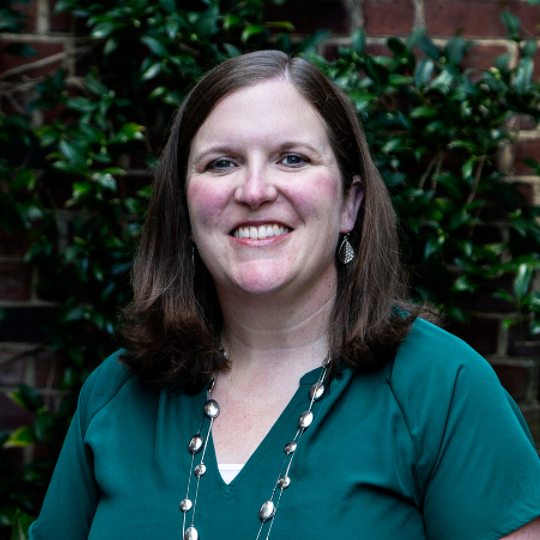 Nancy began as the Staff Associate for Children’s Ministries in October 2014.  She grew up in west central Illinois and graduated in 2005 from Millikin University in Decatur, Illinois, with a Bachelor of Science in elementary education.  She continued on to get a Master of Arts degree in education from Ball State University in Muncie, Indiana. Before joining the staff at University Presbyterian Church, Nancy served congregations in Knoxville, TN, and Indianapolis, IN.   Nancy is a Certified Christian Educator in the PC(USA) and is currently pursuing a Master of Divinity degree at Union Presbyterian Seminary in Charlotte.

In her free time, you’ll find her reading, watching Michigan State sports, and doing just about any craft imaginable!   She also enjoys traveling to visit her family. 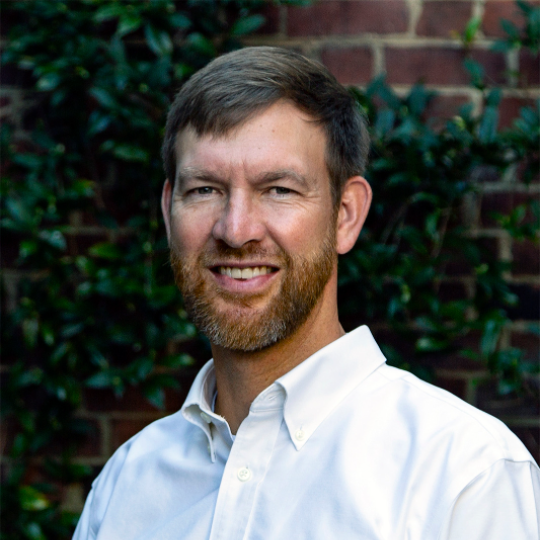 Berry joined the UPC staff in August 2020. A native of Lumberton, North Carolina, he attended the University of North Carolina, graduating in 2003 with degrees in both Economics and Recreation and Leisure Studies. But between freshman dorm move-in and donning a cap and gown, he found a home here at PCM.

After two years of camp and conference ministry and extensive international travel in Central America and Africa, Berry discerned a call to ministry and attended Union Presbyterian Seminary in Richmond.  From there, he has served as an associate pastor at both White Memorial Presbyterian Church in Raleigh as well as Black Mountain Presbyterian Church near Montreat.  In 2017, Berry and Katie, their daughter Aubry and son Will embarked on a two-year journey sailing through the Caribbean and the North American Eastern Seaboard, visiting 12 Caribbean countries in their own 43’ sailboat from Grenada to Maine.

Berry loves the outdoors, hiking, camping, biking, gardening, and playing outside with his kids. 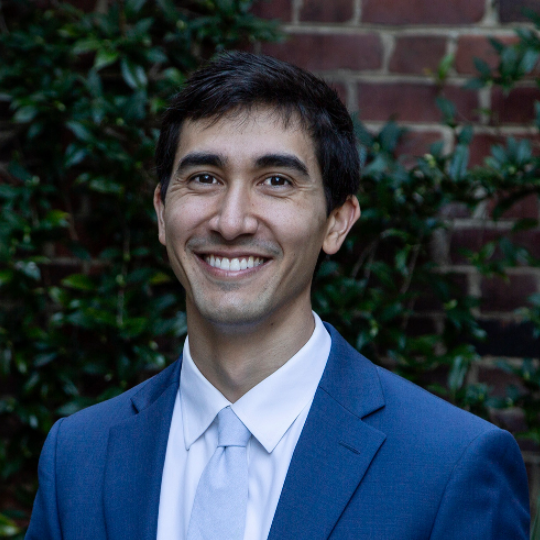 Joey joined the UPC staff in June 2020. Originally from Honolulu, he moved to New York to attended Rensselaer Polytechnic Institute where he graduated with degrees in architecture and lighting while also serving as Director of Music at First United Presbyterian in downtown Troy. He then returned to his first passion of music and attended Yale University where he received a master’s in organ before moving to Durham to take a position as organ scholar in residence at Duke University Chapel where he met his wife Sarah, a Duke Divinity student.

As church musician and teacher, Joey has also served at Chapel of the Cross (Chapel Hill), and St. Paul’s (Norwalk, CT), working with their choirs and chorister programs, and as a teaching artist for the Yale Music in Schools initiative. As an organist, he has had the opportunity to perform across the country in notable spaces including St. Patrick’s Cathedral NYC, Trinity Church Boston, Harvard University’s Busch Hall, and Washington National Cathedral and has been a featured recitalist at conventions of the American Guild of Organists and the Organ Historical Society. 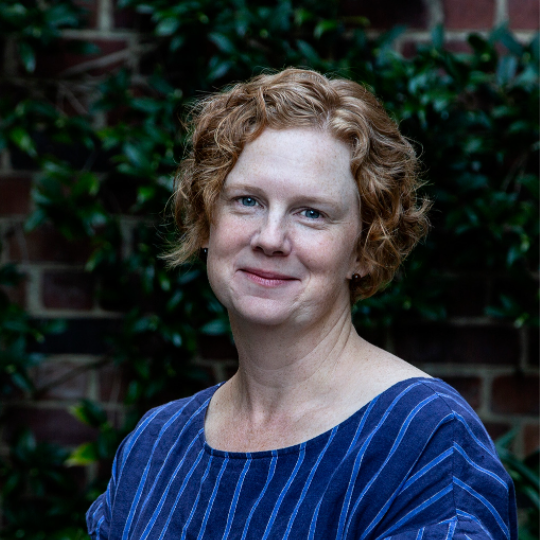 Hadley joined our staff in June 2021. A native of Laurinburg, NC, she is an ordained United Church of Christ minister and has most recently served as a pediatric chaplain for UNC Health Care. Hadley has a degree in English from UNC-Chapel Hill and completed the Master of Divinity degree at Duke University’s Divinity School, and is looking forward to living into her ordination in new ways by having the opportunity to serve, lead, care for, and love our congregation.

Hadley is married to Drew, and they are the proud parents of Hannan and Ruby. 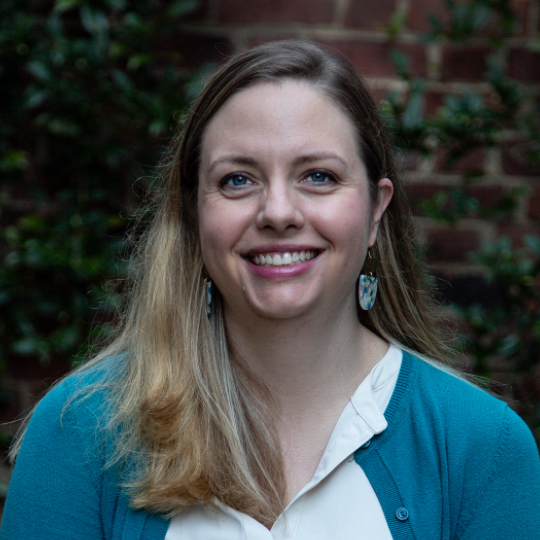 Director of Communications and Stewardship

Erin joined our staff in February 2021 as our Director of Communications and Development. A native of Richmond, Virginia, Erin earned her Bachelor’s degree in English Literature from the University of Mary Washington and a Master of Divinity degree from Baptist Theological Seminary at Richmond. She is an ordained Baptist minister who has served in several congregations, most recently as an associate pastor at First Baptist Church of Lumberton, NC. At UPC, she enjoys serving in a new capacity through the ministry of communication and storytelling.

In her spare time, Erin enjoys reading, catching up on shows on Netflix and Hulu, and spending time with her husband, their energetic daughter, and their extroverted dog. 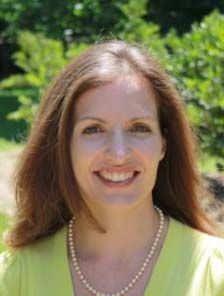 Ellen Parker was hired as Director of University Presbyterian Preschool in August 2009. 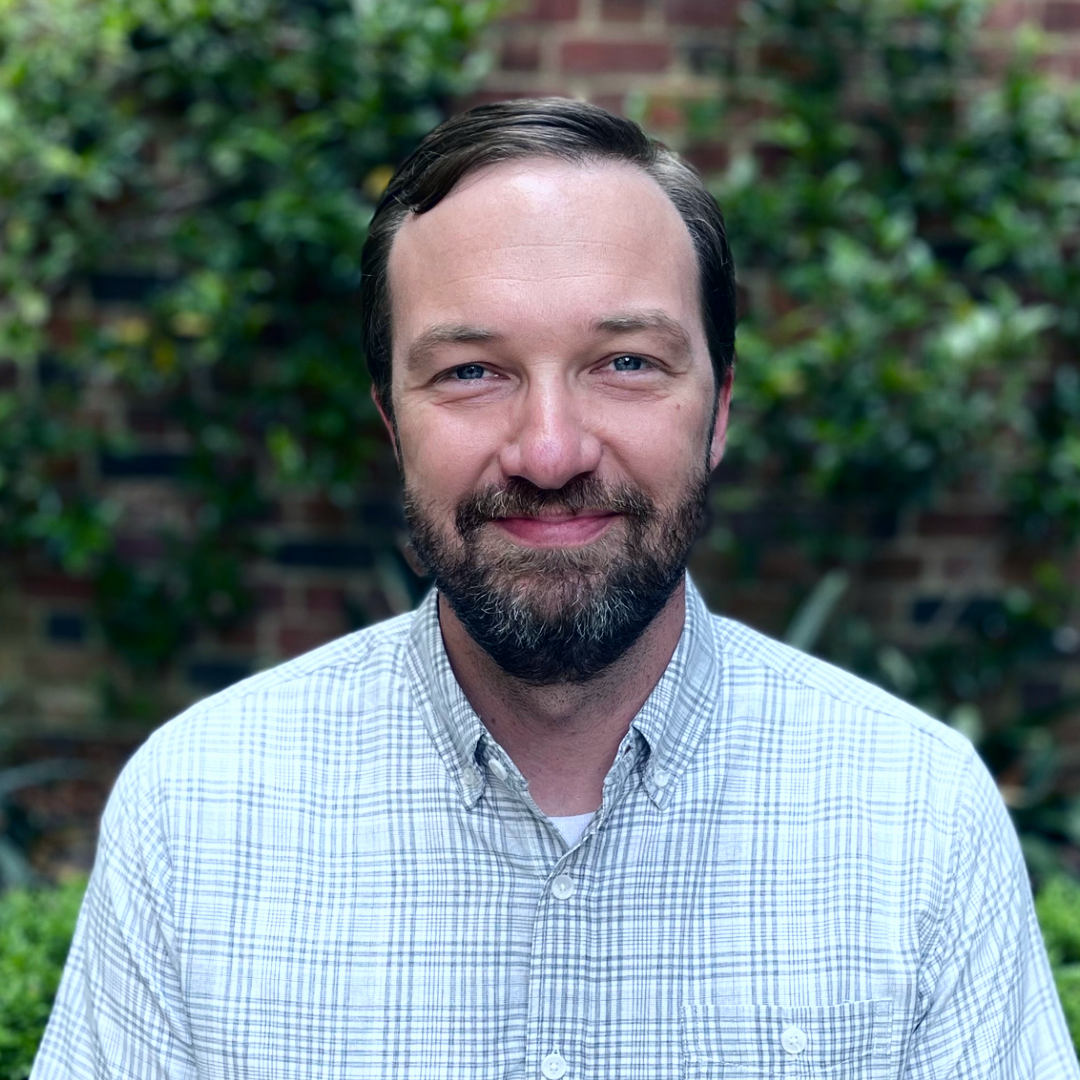 Ryan Byrnes join the UPC staff in May 2022. Born in St. Louis, MO, Ryan has a background in event and facility management through his operations work at convention centers (most recently the Durham Convention Center). He is married to Stephanie, and together they have four children. When not at work, Ryan is most likely to be playing with his kids, reading, teaching himself something new, or daydreaming about the places he hopes to travel one day. 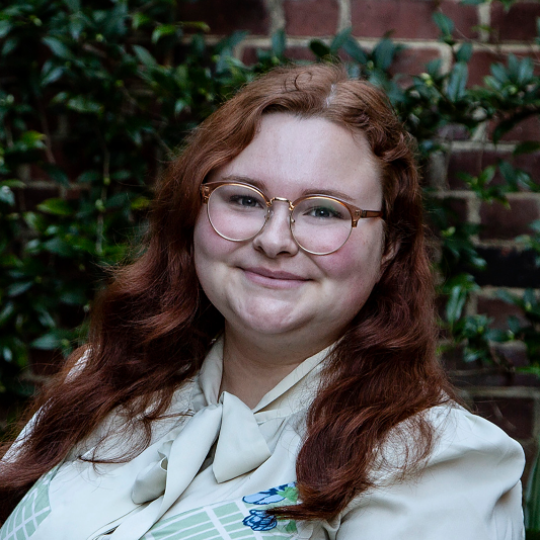 Sara Richard began as our Administrative Assistant in September 2021. Born in New Hampshire and raised in Apex, North Carolina, Sara graduated from William and Mary in 2020 with a degree in Film and Media Studies. During college, she was a member of the William and Mary Choir. From August 2020 through July 2021, she was a member of the Johnson Service Corps, through which she served at a partnering non-profit organization and lived in an intentional community in Durham with three other people. Sara lives in Carrboro with her rabbit, Oswald; her roommate, Mary; and Mary’s cat, Gonzo. In her free time she enjoys singing, embroidery, watching movies, and playing Stardew Valley with her friends. 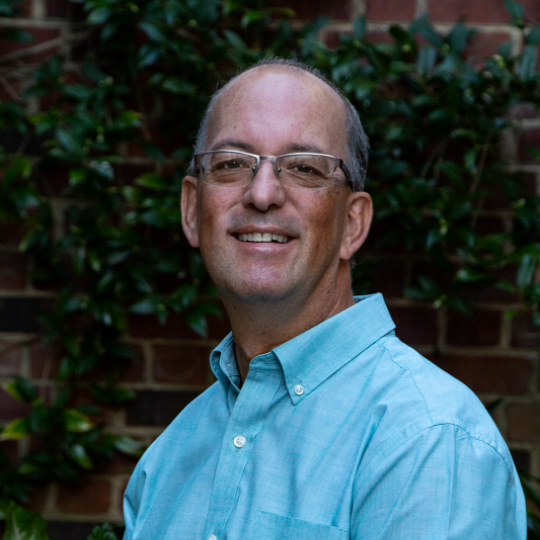 Peter Costa joined the UPC staff in September 2021. Peter is originally from Rhode Island, where he spent 22 years as the Finance Director at a Catholic School. Wanting both a warmer climate and to be close to their daughter, son-in-law, and new grandchild, he and his wife moved to Durham in 2019. 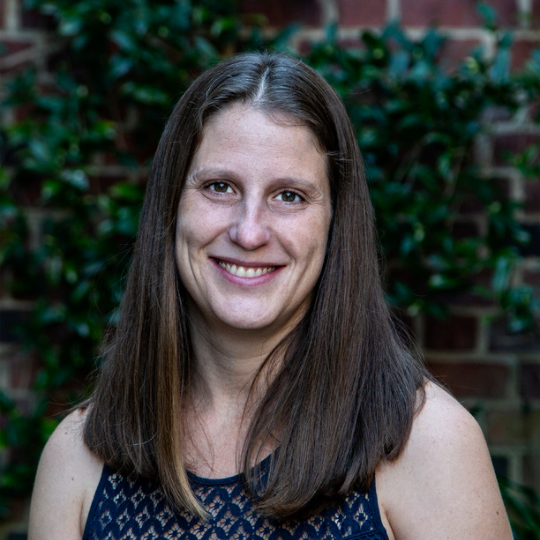 Melani serves University Presbyterian Church as the part-time Financial Assistant. In this role, she assists with the day-to-day financial duties of the church and of University Presbyterian Preschool (UPPS). Melani grew up in Watkins Glen, NY and moved to NC in 1999. She graduated from UNC-Chapel Hill in 2004 with degrees in Management and Society and Sociology. With her husband, Patrick, she has four daughters. When asked why she enjoys working at University Presbyterian Church, Melani said, “I love working with the congregation and my fellow staff here at UPC. I started working here in 2004, took some time off to be at home with my children, and am happy to be back as a part-time employee.” We’re so glad to have you as part of our administrative staff, Melani! 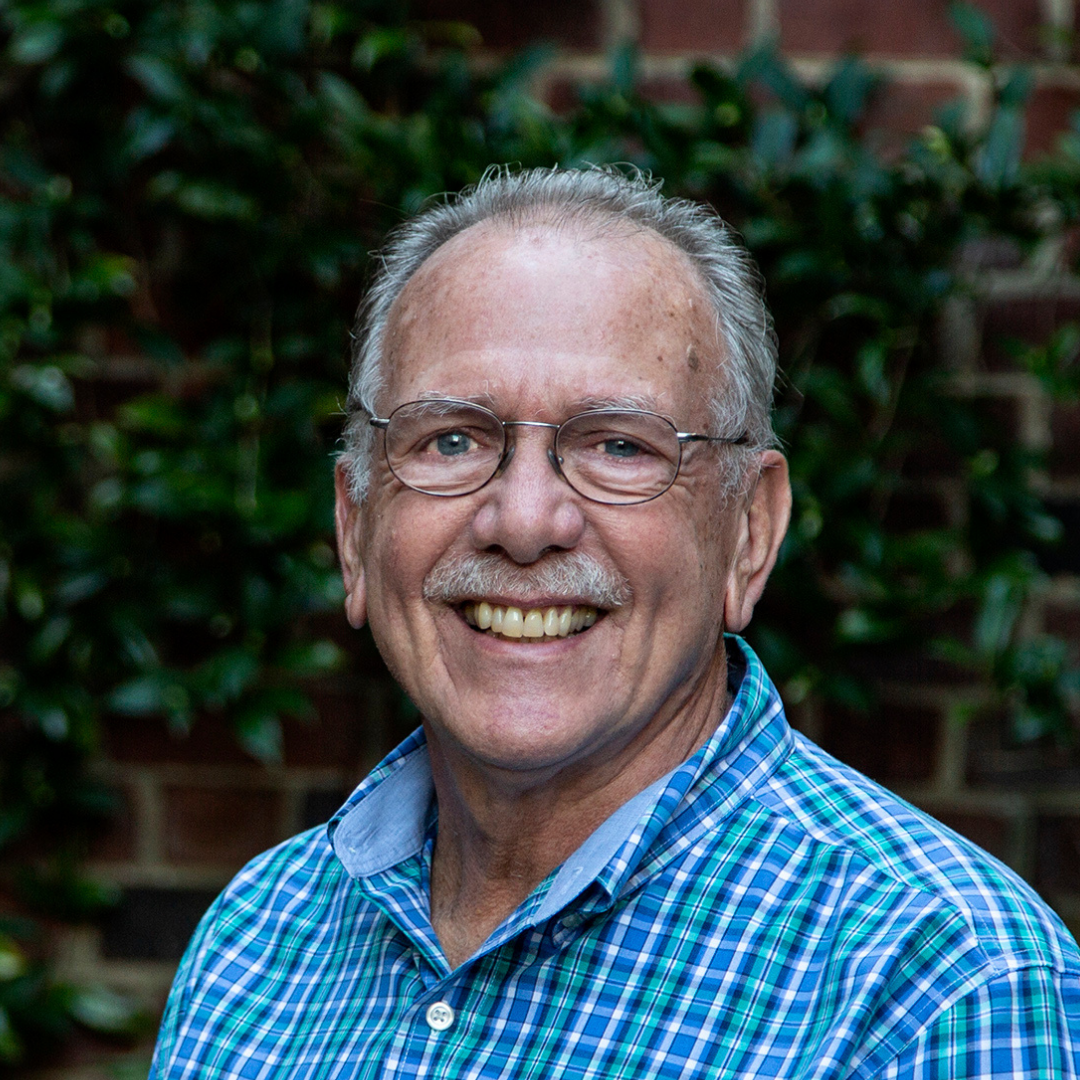 Dennis Dallke is UPC’s Property Manager. He takes care of the church building so members never have to worry about the facilities when coming to worship, meetings, events or other gatherings. Dennis couldn’t do his job alone. Together with Rob Kurtz, UPC’s Sexton, Dennis keeps the building and facilities running smoothly and looking great. Through his diverse career, Dennis has gained the skills and knowledge he uses to serve the congregation at UPC. He’s worked in hospitals, in a hotel, for a railroad, as a freelance potter and in churches, including Methodist and Episcopal churches and a Jewish synagogue. He grew up in the church in Southern California and is the son of a Methodist minister who exemplified service. After school, Dennis moved to Oregon where he married his first wife. He also served in a hospital as a conscientious objector instead of going to Vietnam. He then moved to Alaska to work on the White Pass and Yukon Railway. After their daughter was born, Dennis and his family moved to Florida and eventually to a small community outside Elkin, North Carolina. After the death of his first wife, he felt called back to the church. He married his wife Becky in 1987 and began working at UPC in 1992. Becky and Dennis have two sons together, and now, they have a young granddaughter whom they adore. Dennis would like to share with you why he enjoys working at UPC: “In my time here, you all have helped me learn that the church is all about the people. The building is secondary and wouldn’t be of any use if you weren’t here. It’s really been a pleasure to be working with and serving all of you these last 25 years. I have found that I would rather work in the Lord’s house than anywhere else.” 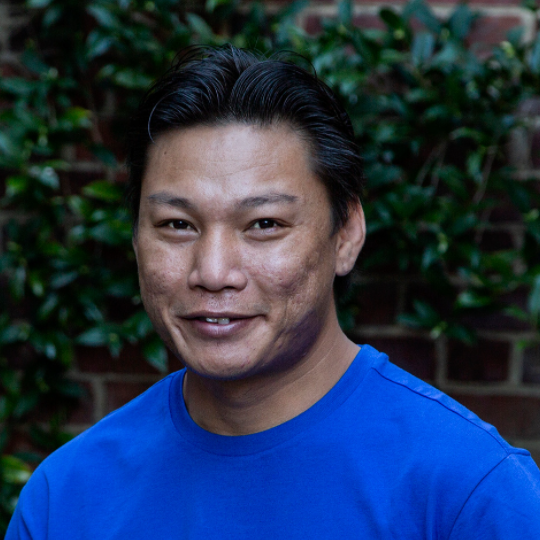 Johnny Clay began working as the UPC Sexton in September 2021. Born in Thailand, Johnny moved to the United States in 2007. He has worked both for University Methodist Church and UNC Dining Services before coming to join the UPC staff. In his free time, Johnny enjoys spending time with his family, especially his four children (2 girls, 2 boys).